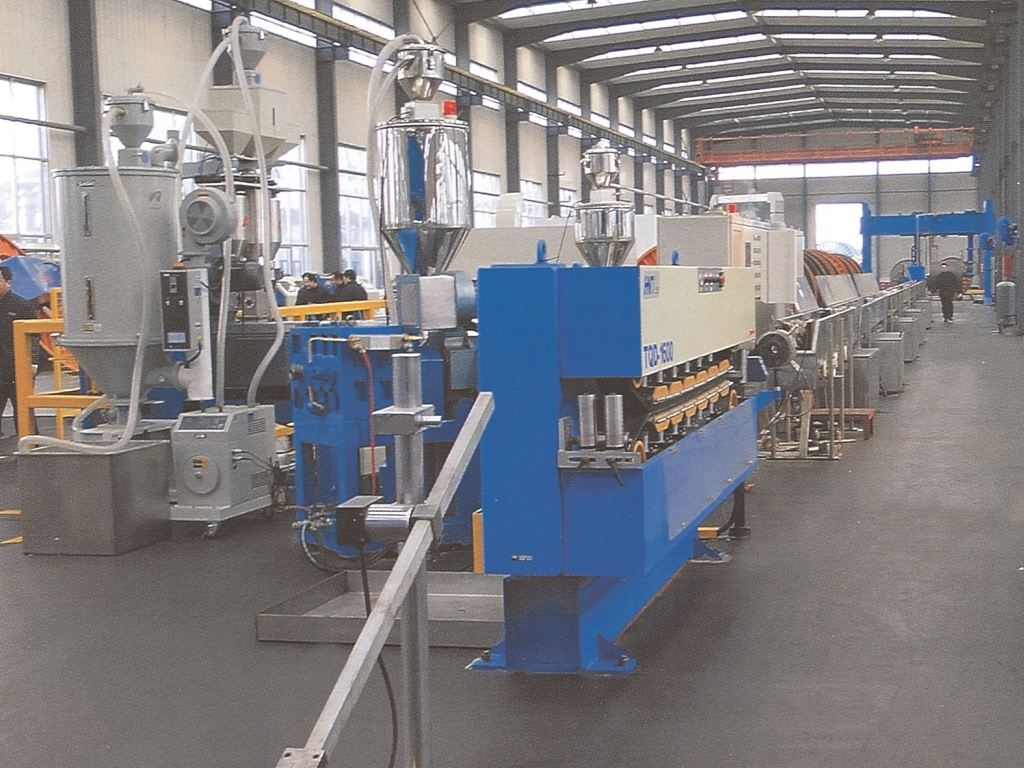 Wire and cable are made by three processes: drawing, stranding and wrapping. The more complex the type specification, the higher the repeatability. Produce wire and cable need best cable extrusion line

The drawing process is divided into: monofilament drawing and stranded drawing.

In order to improve the softness of the wire and cable, the overall degree, so that more than 2 single wire, interwoven together in the specified direction called stranding.

According to the different performance requirements of the wire and cable, the use of special equipment outside the conductor wrapped with different materials. Cladding process is divided into.

2. The first section of the cable extrusion line

A, the basic principle of  cable extrusion line

The plastic insulation and sheathing of wire and cable is made by continuous extrusion, and the extrusion equipment is generally a single-screw extruder. Plastic in the extrusion before, to check whether the plastic is wet or there are no other debris, and then the screw preheated into the hopper. During the extrusion process, the plastic loaded into the hopper enters the barrel by gravity or the feeding screw, and is pushed forward by the thrust of the rotating screw, starting from the preheating section and gradually moving toward the homogenizing section; at the same time, the plastic is stirred and extruded by the screw, and is transformed into a viscous flow state by the external heat of the barrel and the shear friction between the plastic and the equipment, forming a continuous and uniform material flow in the screw groove. Under the action of the temperature specified in the process, the plastic is transformed from a solid state to a molten plastic object, and then pushed or stirred by the screw, the fully plasticized plastic is pushed into the head; the material flow that reaches the head is extruded from the mouth of the die sleeve through the annular gap between the die core and the die sleeve, and extruded around the conductor or wire core to form a continuous dense insulation layer or sheath layer, and then cooled and cured to make wire and cable extrusion line.

The main basis of cable extrusion machine is the plastic state of the plastic. Plastic in the extruder to complete the plastic process molding is a complex physical process, including mixing, crushing, melting, plasticizing, exhaust, compaction and finally molding shape. It is worth noting that this process is achieved continuously. However, it is customary to divide the continuous process of extrusion into different stages, namely: plasticization stage (mixing, melting and homogenization of plastics); molding stage (extrusion of plastics); and shaping stage (cooling and curing of plastic layers).

The first stage is the plasticizing stage. It is also called the compression stage. It is done in the barrel of the extruder, after the rotating action of the screw, so that the plastic from granular solid to plastic viscous fluid. The source of heat obtained by the plasticizer in the plasticizing stage is twofold: one is the electrical heating outside the barrel; the other is the frictional heat generated by the rotation of the screw. Initially, the heat is generated by the barrel outside the electric heating, when the normal driving, the heat is obtained by the screw selection of materials in the compression, shear, mixing process with the barrel wall friction and internal friction between the molecules of the material and generated.

The third stage is the shaping stage. It is carried out in the cooling water tank or cooling pipe, and the plastic extruded wrap layer is changed from the amorphous plastic state to the definite solid state after cooling.

In the plasticizing stage, the plastic is pushed along the screw axis by the screw to the head of the process of moving, experiencing changes in temperature, pressure, viscosity, and even chemical structure, these changes in different sections of the screw is different. The plasticization stage is artificially divided into three stages according to the process of material changes in the flow of plastic, namely the charging section, the melting section, and the homogenization section, which is also the customary method of segmentation of the cable extrusion lien, each segment has a different effect on plastic extrusion, and the plastic presents a different form in each segment, thus showing the extrusion characteristics of plastic.

In the melt section, the crushed, softened and preliminarily stirred and mixed plastic, due to the pushing and squeezing action of the screw, moves along the screw groove toward the head and enters the melt section from the charging section. In this section the plastic encounters a higher temperature heat effect, which is the source of heat, in addition to the external barrel point heating, the frictional heat of the screw rotation is also playing a role. And the thrust from the charging section and the reaction force from the homogenizing section make the plastic form a reflux in the advance, which is generated in the screw groove and in the gap between the screw and the barrel, the reflux is generated not only to make the material further homogeneous mixing, but also to increase the heat exchange effect of the plastic and reach the heat balance of the surface. As the action temperature at this stage has exceeded the rheological temperature of the plastic, coupled with the long action time, the plastic undergoes a physical transformation, and the material in contact with the heated barrel begins to melt, forming a polymer molten film on the inner surface of the barrel. When the thickness of the molten film exceeds the gap between the top of the thread and the barrel, it is scraped down by the rotating thread and gathered in front of the advancing thread, forming a molten pool. Due to the relative motion of the barrel and the thread root, the melt pool creates a circular flow of material. Behind the screw prism is the solid bed (solid plastic), the material moves forward along the screw groove, as the depth of the screw groove in the melt section gradually becomes shallower toward the homogenization section, the solid bed is constantly squeezed to the inner wall of the barrel, accelerating the heat transfer process from the barrel to the solid bed, while the rotation of the screw produces a shearing effect on the molten film on the inner wall of the barrel, thus melting the material at the interface between the molten film and the solid bed, and the width of the solid bed gradually decreases and knows completely disappeared, that is, from the solid state to the viscous flow state. At this time, the plastic molecular structure has changed fundamentally, the intermolecular tension is extremely relaxed, if it is a crystalline polymer, the crystal area begins to reduce, amorphous increase, in addition to the very large molecules, the main body completed plasticization, that is, the so-called “preliminary plasticization”, and under the action of pressure, the exclusion of the gas contained in the solid material, to achieve Preliminary compaction.

In the homogenization section, there are several outstanding process characteristics: this section of the screw thread depth is the shallowest, that is, the smallest screw groove volume, so here is the screw and the barrel between the pressure generated by the largest section of work; in addition from the screw thrust and screen plate reaction force, is the plastic “short” direct zone; this section is also the cable extrusion line process This section is the highest temperature section of the cable extrusion line process, so the plastic in this stage by the radial pressure and axial pressure is the largest, this high-pressure effect, enough to make all the gas contained in the plastic excluded, and make the melt compact, dense. This section has the name of “homogenous pressure section” which is derived from this. Due to the high temperature, the polymer that cannot be plasticized after the melt section is finished plasticizing in this section, so that the “particles” are finally eliminated and the plastic is fully and uniformly plasticized, and then the fully plasticized and molten plastic is extruded evenly by the head with a fixed amount and pressure.

5.The flow state of plastic in the cable extrusion machine process

During the cable extrusion line process, the plastic is pushed by the rotation of the screw and the barrel is not moving, which generates relative motion between the barrel and the screw, and this relative motion produces friction on the plastic and makes the plastic be dragged forward. In addition, the flow of plastic in the screw and barrel is complicated by the resistance of the mold, porous screen and screen in the head, which in turn creates a reaction force on the plastic as it advances. The flow state of plastic is usually viewed as consisting of four forms of flow as follows.

1) Positive flow – is the flow of plastic along the screw groove toward the head of the machine. It is generated by the pushing and squeezing force of the screw rotation and is the most dominant of the four flow forms. The size of the positive flow directly determines the amount of cable extrusion line.

2) Reverse flow – also known as counter flow, it flows in the direction exactly opposite to that of the positive flow. It is caused by the pressure (plastic forward reaction force) in the head area due to the die, screen, and screen in the head obstructing the positive movement of the plastic. From the head to the filling port, a “backflow under pressure” is formed, also called “counter-pressure flow”. It can cause loss of production capacity.

3) Cross-flow – This is the flow of plastic along the axis, i.e., perpendicular to the threaded groove. It is also formed by the pushing and squeezing of the screw as it rotates. Its flow is resisted by the resistance of the side wall of the threaded groove, due to the mutual resistance of the threads on both sides, while the screw is in rotation, causing the plastic to create a flip movement in the screw groove, forming a circular flow, so the cross-flow is essentially a circular flow. The ring flow to the plastic in the barrel of the mixing, plasticization into a molten state, is inseparable from the role of the ring flow. The ring flow makes the material in the barrel to produce stirring and mixing, and facilitates the heat exchange between the barrel and the material, it is important to improve the quality of the cable extrusion line, but the impact on the extrusion flow rate is very small.

4) Leakage flow – It is also generated by the resistance of dies, screens and screens in the head. However it is not the flow in the screw groove, but the backflow formed in the gap between the screw and the barrel. It can also cause a loss of production capacity. Since the gap between the screw and the barrel is usually very small, the leakage flow is much smaller than the positive and reverse flow under normal conditions. During the cable extrusion line process, the leakage flow will affect the extrusion volume, and an increase in leakage flow will decrease the cable extrusion line volume.

The four flow states of plastic will not occur in separate forms, and there will be neither true backflow nor closed loop flow with respect to a given plastic mass. The actual flow of molten plastic in the threaded groove is a combination of the above four flow states in a spiral trajectory forward.